Being an Artist Means Making Time to Create Art

Because I have heard it so many times over the last 20 years, I wanted to give a message of encouragement and a challenge to some people.

We are what we choose to become, what we decide we want and need to be. We are individuals with responsibilities and challenges and lives. People depend on us.

Over the years and as recently as last week, people have told me that they want to do more art, but note that they are too busy. They ask me how I 'find' the time to do my art. I tell them simply: "I make the time." So, to all who say they want to "be an artist," please stop only talking about it and DO something about it... today and every day forward. 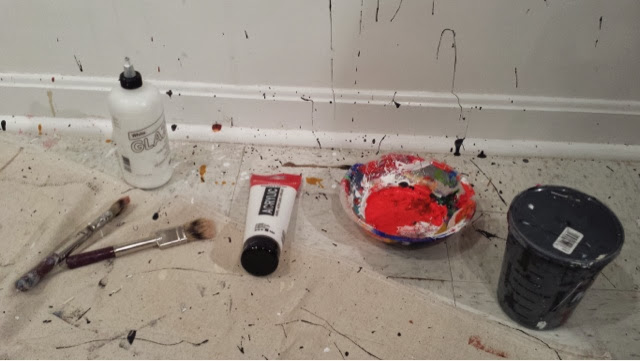 That is my quote, my trademark credo and my recommendation.

- In the late 1990's, I co-piloted a 2-person plane for 45 seconds as we flew over Mont St. Victoire in Aix-en-Provence (France).
- I worked 2 days with a team on a dinosaur dig in the Bad Lands of Montana.
- I lived in France and went to school for a year in college and have returned more than 6 times since.
- I have a full-time day job.
- I can draw figures and landscapes on an Etch-A-Sketch.
- I have a home, family, friends, and a full life.
- And... I am a full-time, working artist with a fine arts business.

Your decision is yours and yours alone to make: decide and make the time to work and become the artist you say you want to be... starting today. It takes action and commitment. It is hard work...but it is very satisfying....

The decision is a very personal one and involves sacrifice. Decide if it is for you...and then don't turn back! 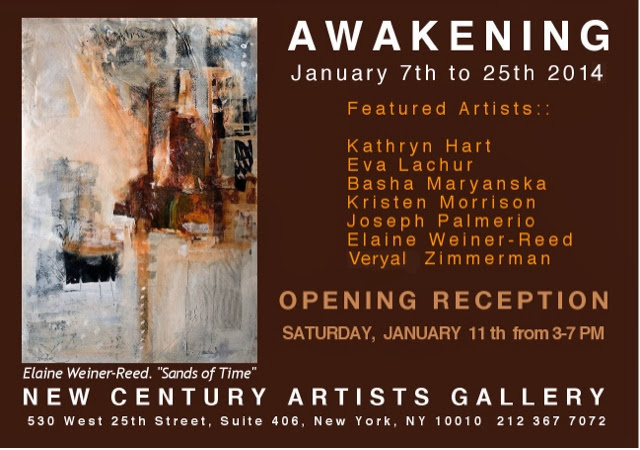 Check out one of my breakthrough '3D' paintings - Elaine Weiner-Reed (EWr)
Featured at FIAC, Paris! 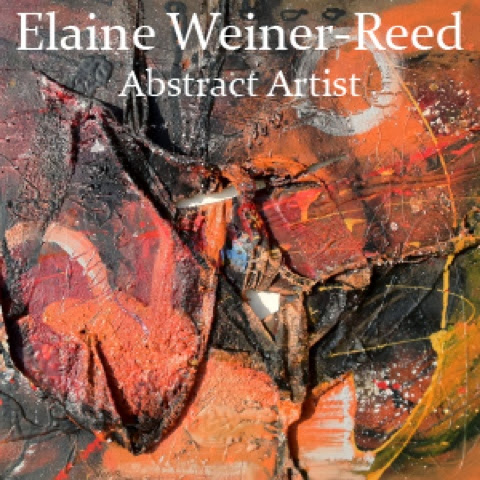 Art is a Many Splendored Thing & So Are Dragons

Art is personal. It comes in many moods and can touch on any subject or subject matter from political realities to imaginary worlds or dreams. It can be serious, deep, light-hearted, pretty, amusing, gruesome, gritty, colorful, stark, and just about any other adjective you could think of... It can focus on anything, anyone, anytime, and be in any format, media, or style.
The possibilities are as endless as they are exciting. No two visions are the same.  At different times throughout our creative periods, we artists embark on different projects and themes for different reasons.
Knowing my work, can you believe I have drawn over 50 dragons? It all started back in 1992 when one nephew asked me to draw him a dragon. I told him that I had never drawn a dragon, and he said those magical words: You can do it, Aunt Elaine. And in that moment, as my heart swelled, I knew I could do it... And so I drew my first dragon that day and made a young boy very happy. His faith in me was a priceless gift I never could repay.
Before long, I couldn't stop drawing dragons, naming them, and giving them personalities. Well, actually, they defined themselves as my sketches evolved. No one can fully control a dragon, after all!
Please meet three of my dragons from a coloring book I created called "Imagine This I - A Dragon Coloring Book" (copyright 1992; Weiner-Reed) 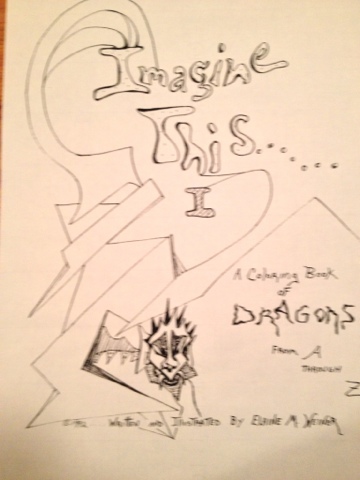 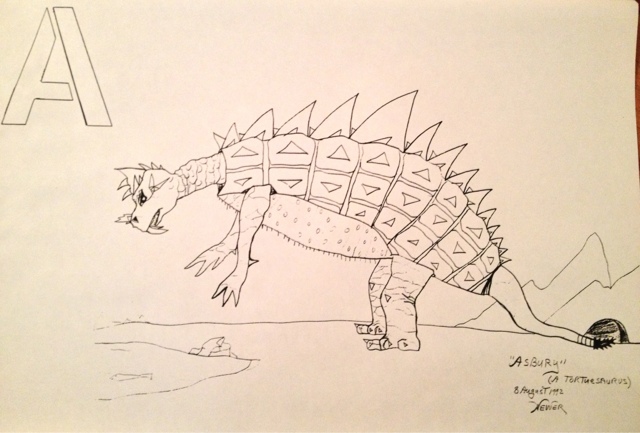 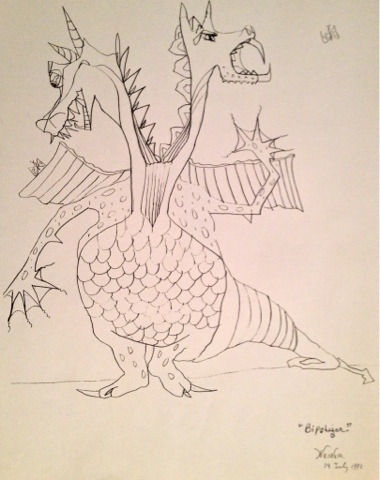 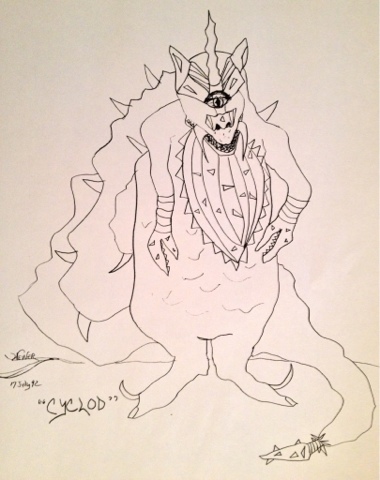 Enjoy!
And remember...inspiration is right in front of us, next to us, inside us...just waiting to be released!
Happy creating!
Yours in Art,
Elaine
No comments:
Email ThisBlogThis!Share to TwitterShare to FacebookShare to Pinterest

Register and Vote for Weiner-Reed (EWR) before Midnight on 2 Sept. and Send Her to Paris


Please share the following post/link with friends and your groups and all vote for me and my artwork so I can win the People’s Choice Award:  a Trip to Paris with a Solo Exhibition! Please vote by 2 September 2013.

Thanks very much! Tell me on my Facebook page once you vote for me. I'll let you know when I get the results, probably in October.


No comments:
Email ThisBlogThis!Share to TwitterShare to FacebookShare to Pinterest

Art Scams & Artists - Beware of "Bill Curry" and others like him!

Art Scams & Artists: There is no better teacher than experience in the school of life.

This week I had a very interesting experience. I learned a lot from it and I hope that by sharing it, others can learn from it and not fall prey to Art (or other) SCAMS. As an artist, we are to some degree "public figures" and therefore apparently present ourselves as an easier potential target for scammers. People know that artists market, exhibit, and sell their work to clients and collectors who often were unknown to the artist until they contacted the artist to make a purchase. Most customers start out as "strangers," so selling to strangers is common practice in any business.

Scammers believe that there is an infinite pool of trusting people out there. Fortunately for me, I am cautions, while still trying to remain optimistic or trusting.

Following is my scam-avoided story:

Art Scammer, BILL CURRY, invested more time than most in his spam email attack by tailoring it. The only mistake I made was in not researching him FIRST before losing some time in email exchanges.

His approach (M.O.) was rather sophisticated; he has apparently done this often (or operates in a 'pack') using different aliases. He chooses a real painting by the target artist in question, says he is from California (or elsewhere, I presume), and then as you get drawn in, he starts the purchase rush-job because of his supposed work and imminent business transfer situations. In my case, Marketing Executive 'Bill' was leaving on a last-minute business trip to France. Then (he told me) at month's end, he would be moving to South Africa for a promotion!
Needless to say, I questioned him about France (as you know--I love France!), about where he was moving in South Africa (Africa intrigues me), and congratulated him. Fortunately, as I said, I was cautious. I had gotten a P.O. box so that Mr. Curry would not have my home address. I had worked up pricing and drafted a formal art purchase agreement, and I requested a money order for the exact painting purchase amount (including state sales tax) be included with the signed, fully-filled-in contract. I specified that I could not calculate the final/full purchase amount until I had a shipping address for him or his agent/representative. At which point Bill informed me that he would -- for expediency and because he was ready to start his conference momentarily -- have to send me a certified check from his (unnamed) bank because they would not do money orders. Then, the icing on the cake: He indicated that "to kill two birds with one stone" he would write the check for the amount I specified PLUS increase the amount to include his mystery-shipper fees (again, he was very short on details). He would be most appreciative if I could then cut a check to his shipper for the difference and meet up with him (to be determined) in order to pay him and have him inspect the painting. He even had the gall to say he was doing this because he felt HE could trust ME...!

Fortunately, I was on the alert, and with that latest proviso of his, I immediately sent him an email saying I could only accept the specified amount according to my accountant, that I would not pay his shipper, that I did not know when/if I could meet with his shipper, and that he should send/pay his shipper separately. I again emphasized that I would accept nothing until we had settled on all those very important details. Once I had sent that email, I began researching him and quickly found the links below and many others about him and his careful scam. Better late than never!  So, needless to say: I immediately emailed him again, with the word "Cancel" in the subject line, and (as if he cares!) admonished him politely (smile).

So, artists: Let us continue to help each other and alert others to such activities. Most importantly: Let us learn from each other and arm ourselves against the crooks. My lessons learned: Be alert, beware, do my research FIRST and ask for creds and details (as I did).

On a positive note:
I am out nothing. I have learned valuable life lessons AND I now have a prepared buyer contract and a P.O. Box for future credible art purchases.
...And should an envelope appear in that new P.O. box..., I will report it to the USPS, mark it "RETURN TO SENDER," and promptly repost it unopened.

Have a good week!


2 comments:
Email ThisBlogThis!Share to TwitterShare to FacebookShare to Pinterest

“(EWR) is a colorist, ranging from savage to suave and delicate. Her experiments in pushing two dimensions into three, with forms projecting off the canvas in both rugged and subtle ways intrigues and fools the eye, the color sometimes belying the 3D forms, making them seem 2D, an interesting idea.” [HN - April 2013]


In response to a specific work (Jazz Trills):
“…your (EWR) work is not just drop-dead, in-your-face Abstract Expressionism, but there is a rich, sensitive subtlety and color to it….”

“Making art is an exploration, of techniques, traditions, personal taste, non-sense, and determination. Elaine Weiner-Reed (EWR), as student and friend, has traveled that road with hard work and smiles.  Her present work is the most expressive and personal I have seen and the finish line is still ahead. It has been my pleasure to be a part of that journey.” [WL - April 2013] 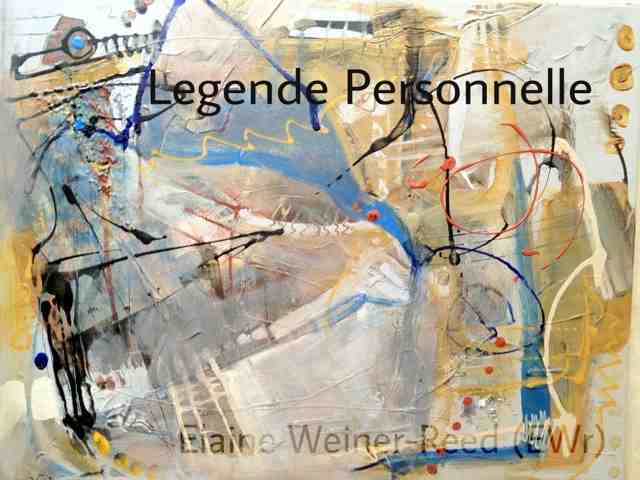 A toast to Paolo Cuehlo!
No comments:
Email ThisBlogThis!Share to TwitterShare to FacebookShare to Pinterest

From Studio to Sketchbook to Opening Reception

Elaine Weiner-Reed and The Sketchbook Project

In the Artist's own words:
“Honoring the journey:  Art is as important to me as breathing. Like life, painting is an adventure -- exploration that comes with challenges, discovery, and wonder. Creating art is making something that does not already exist." 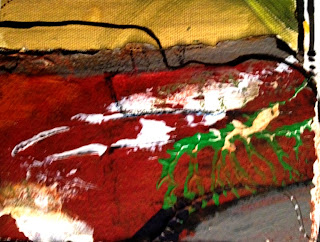 
Please come and meet the Artist at the Opening Reception!