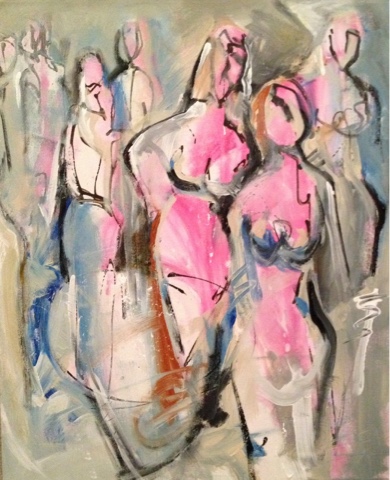 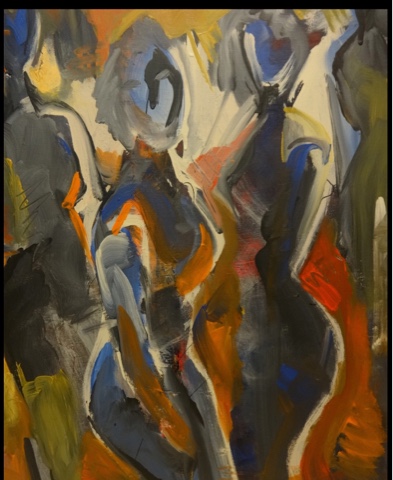 Elaine Weiner-Reed    © 2014 EWRARTIST
"Static Electricity" (Acrylic, 22" x 24")
Have you ever entered a room and it fairly crackles with energy? I call that "static electricity." And I find that sometimes it is so powerful that it almost knocks me over...or sends me running (or watching my back)... At other times, it is more subtle, sparking just under the surface.  Heed the intuition when you feel that surge... It could be our subconscious picking up on vibes beyond our comprehension.
#art #artist #nyc #abstractexpressionism #red #abstract #lacma #figurativeart #painting #laart #snmfa #baltimore #washington #nice #losangeles #sacramento #relationships #memories #artobiography #fiac #fineart #museum #gallery #artcollector #ancestors #carouseldulouvre #life #saphira&ventura #paris
Official Press Release:
"TERRA" DELIVERS ART IN PARIS
Visual arts exhibit produced by Brazilian and French curators explores the beauty and the challenges of the environment
Paris, October 9th, 2015 – “Terra” (earth) - one of the four elements of nature - is the inspiration for a visual arts exhibit that will be held at Artitude Gallery in Paris, from October 19th to 25th, 2015. The vernissage is scheduled for Monday, October, 19th at 6pm.
Through the work of artists from different nationalities, "EARTH" will display the beauty and the challenges of the environment, featuring paintings, sculptures and photographs inspired by nature.
The show is produced by a partnership between the galleries Artitude, in Paris, and Saphira & Ventura, in New York, and is curated by the Brazilians Alcinda Saphira and Louis Ventura and the French Jean Pierre Lorriaux.
"TERRA" is a traveling art exhibit created by the Brazilian curator Alcinda Saphira in 2007. The project brings together artists with different nationalities, backgrounds and styles under the same theme, which aims to raise awareness to the importance of preserving the planet.
The first three editions of "TERRA" took place in New York with the participation of more than 50 artists in total. This year, the exhibit arrives in Paris with 22 Brazilian, American and European artists.
"The work of these artists are characterized by the diversity and complexity of various cultures, but they do have in common the libertarian art". Their commitment as citizens encourages them to do art not only with commercial intent, but also with philosophical and social purposes”, she added.
The participating artists are: Elaine Weiner–Reed, Katia Gerasimov, Galina Krasskova, Mira Satryan, Cynthia McCusker, Hanna Oren – Huppert, Sergio Azol, Fatima Campos, Basha Maryasnka, Isabela Couto, Silveira Lopes, Rogerio Martins, Eunice Khoury, Edoardo Pacelli, Julia Equi, Stalleikem, Ricardo Raposo, Acacio Pereira, Marcos Amaro, Marita Wolf, Cassandra Fortes, Meme Vizotto, Eda Miranda, Jacques Stemer,       Barbara –Andres Schucht, Nicolas Savine.
Next stop: Carrousel du Louvre
The partnership between Ava Gallery and Saphira & Ventura Gallery continues during the "Art Shopping at the Carrousel du Louvre", which takes place on October 23th to 25th, in Paris.
The Saphira & Ventura gallery will bring 12 Brazilian and 8 American artists for the event.
The "Art Shopping at the Carrousel du Louvre" takes place twice a year and is an opportunity to find pieces by established and emerging artists. Galleries from several countries participate in the event.
Those interested in participating in future editions of "TERRA" and "Art Shopping at the Carrousel du Louvre", should contact Saphira & Ventura gallery sending an email to alcindas@aol.com.
SOBRE SAPHIRA & VENTURA GALLERY
Headquartered in New York with a representation in France, Saphira & Ventura gallery produces exhibits in the United States, Brazil and Europe with the mission to engage and connect artists from different communities in the world. The gallery is a result of the successful work of the curator Alcinda Saphira and the economist Louis Ventura, who has both administered the Saphira Studio-Seigreen for the past five years. The studio has produced exhibits in renowned places like UN and NY Public Library. Artists interested in promoting their work in the international arts market and being part of a global network, should apply for membership with Saphira & Ventura Gallery. For more information visit the website www.saphirastudio.com or send an email to alcindas@aol.com.
1 comment:
Email ThisBlogThis!Share to TwitterShare to FacebookShare to Pinterest
Newer Posts Older Posts Home
Subscribe to: Posts (Atom)