I Can Paint A Song | He Can Sing A Painting

Yes... I can definitely paint a song

I don't believe in coincidence, but rather believe everything happens for a reason. True, we might not realize the rationale or meaning of any chance encounter at that moment... We might never understand it. It might not even register with us as anything significant. Regardless, it could have made some impact, possibly making us grow, go in another direction... Perhaps we learned a lesson from it, or that chance encounter led to a future job, partner, or new friend. What about the other party in the chance encounter? Another possibility could be they met us for a specific reason to lead them to or away from something or someone.

Listen to My Painting CHANCE ENCOUNTERS

Hear How It Sounds to One Musician

Some chance encounters might inspire us to create or serve as a source of inspiration or provide a new idea, whispering to us like a Muse... That has happened to and for me. Experiences and encounters have influenced and benefited my art. Some encounters (good or bad) have become the focus of paintings as I sought resolution and sometimes more. Negative or positive, chance encounters are intriguing and should not be ignored.

I try to pay attention to chance encounters. In fact, that is the title I gave to an abstract figurative painting in which I featured my son sitting at a table in a pub. That first painting I had painted of him in over 15 years, Chance Encounters, is based on memories and photos of our 2016 trip to Ireland. As you can imagine, the painting is very personal and means a lot to me. 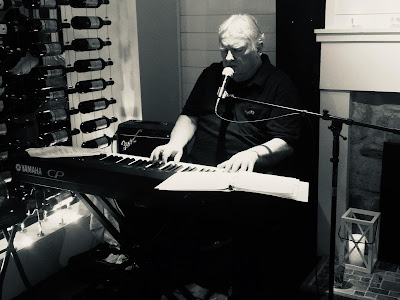 So I find it more than just a coincidence that "Chance Encounters" reconnected me to a past chance encounter - one that happened in the 1980's. I met singer/songwriter Gerald Richard Ingley ("Jerry") by chance back then, and through the years a friendship developed and lasts to this day.

So, early this year, I reached out to Jerry while trying to arrange and coordinate a list of musicians and poets for creative collaboration events planned for my joint May-June exhibition "Portraits of Life -The Art of Storytelling" with April M Rimpo.  From a selection of our painting images for the show, Jerry selected one each of my and April's paintings...and the one of mine he chose was "Chance Encounters." At the time, he had no idea of the painting's story or what it meant to me, but he chose it because it intrigued him, set his imagination rolling...

About what he saw in the painting that inspired his song, Jerry writes:

“I saw a club or restaurant, a guy at a table with two glasses, and a woman in the foreground with her back to the table. I took the position of the woman and built a story of her not wanting to see him anymore, but too often seeing him and remembering him, and how she tried to get over him... the encounter in the club is the basis for the final verse.”

Listen to Jerry Singing a Painting

Click on this link to learn more about genesis for my EVERY PAINTING IS A SONG initiative.

Thank you for your interest.

I hope you like what you heard and saw... 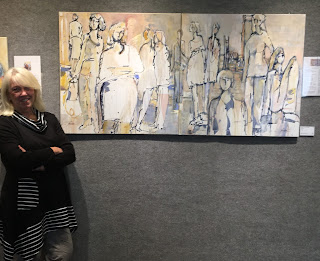 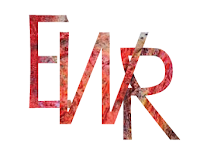